These days, CO2 emissions are again dominating the headlines. Mankind has consumed the resources that nature is able to regenerate within one year already by the end of July (Earth Overshoot Day). In this context, the German economic magazine Wirtschaftswoche inquired the DAX corporations in an article published lately about their climate goals to be reached. Many of these corporations are quite ambitious and aim to be carbon neutral already before 2050. However, the current discussion about introducing a CO2 tax is creating worries for everybody.

Nowadays, the majority of corporations allows insight already in their consumption of energy and resources, about their waste production and emissions. While reporting often occurs automatically or via external service providers, the Global Reporting Initiative, for example, capturing basic raw data for this reporting means quite a huge challenge for many corporations at this point in time. Though, data is available, it is scattered in different divisions of the enterprise and is often kept in various software systems. 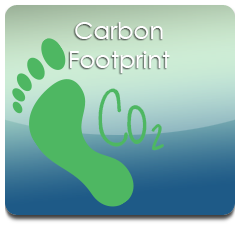 It is exactly this capturing process that is perfectly supported and optimized by our Carbon Footprint Module that has successfully been used by customers world-wide since years. Depending on the type of requirements, data can be captured for single buildings, for entire sites, for specific countries or different business units. As a matter of fact, capturing criteria can be combined in such a way that power consumption for each building, paper waste for the specific site and the CO2 emissions caused by business travels of an entire region can be precisely documented.

The amount of consumption can be registered at any point in time and for any interval as well. Internal calculation methods in the module subsequently determine the required monthly or yearly values. Thus, it is entirely sufficient to take over only the consumption amount from the respective bills- there will be no additional workload for the users. It goes without saying that all other conversions such as kWh of power to tons of CO2 are carried out automatically according to the respectively valid factors.

Our Carbon Footprint Module offers an intuitive input dialog allowing also casual users a smooth and fast data entry. Thanks to interfaces, data already captured can be taken over automatically. In this context, a typical example are energy consumptions that are digitally available in the respective system and have to be reported on in an aggregated form in the course of environmental management activities.

All data collected is stored in a central and permanent form, and it can be evaluated graphically or alphanumerically at any time. Thus, it is very easy by just a few clicks to establish yearly benchmarks, or benchmarks on different sites or business units, or on the specific evolution to fulfill internal objectives. In addition to that, already existing internal or external reporting tools can be provided quickly with data required via standard interfaces.

You can find out more about which cookies we are using or switch them off in settings.